Saladax Biomedical, Inc., the leader in developing oncology diagnostics that increase the impact of personalized medicine, announced today that Dr. Salvatore J. Salamone, the Company’s Founder, President, and Chief Executive Officer has been inducted into the New Jersey Inventors Hall of Fame. Salamone is being honored for: “Luminary discoveries and contributions in the fields of oncology research, therapeutic diagnostics, health care and medical device services.”  The award was presented at an award ceremony on Thursday, October 27, 2016.

Dr. Salamone has over 30 years of experience developing diagnostics. He is recognized globally in the field of drug monitoring, and has published extensively in this area. Dr. Salamone has been awarded 41 US Patents and over 100 foreign patents. These patents serve as the fundamental basis for the products launched at both Roche and Saladax. The accumulated sales of these products have exceeded $1 billion.

Dr. Salamone co-founded Saladax in an effort to meet a need in the oncology community; developing diagnostics for oncologists to dose patients correctly.  With pharmaceutical companies placing greater emphasis on personalized medicine, Saladax has become a leader in oncology with tests that ensure patients are receiving the correct dose of chemotherapy.

“We will not fully achieve the promise of personalized medicine until we also ensure patients are receiving the correct amount of drug for their body” said Dr. Salamone. “This is my life’s work and I am deeply honored to be recognized for it.”

Dr. Salamone grew up in Central New Jersey and graduated from J.P Stevens H.S.in Edison. He attended Villanova University where he received his BS degree and returned to NJ to earn M.S. and Ph.D degrees in chemistry at Rutgers University. While at Rutgers, he served on the Rutgers University Board of Trustees, received the Graduate Student award for Research Excellence, as well as the Charles A. Sabbath and the Martin H. Freedmen awards in Chemistry. After graduating Dr. Salamone received a fellowship to study at Oxford University. One day while at Oxford he received a telegram from Roche Diagnostics asking him to consider a position in this growing division on the Nutley NJ campus. He accepted the position and began his tenure at Roche in 1984. As Roche Diagnostics became the world’s largest diagnostic company Dr. Salamone was promoted to Vice President and headed US R&D activities for the Laboratory Systems Division. Dr. Salamone left Roche in 2001 and served as Senior Vice President of R&D for Orasure Technologies before founding Saladax Biomedical, Inc.

“I am humbled to be receiving this award along with so many other talented individuals who are improving our lives through innovation,” Salamone said. “I am proud to have lived in the only state to have its own Inventors Hall of Fame, and overwhelmed to be included with some of the great innovators, like Leo Sternbach and Thomas Edison.”

Dr. Salamone attributes much of his success to a supportive family, outstanding colleagues and a corporate environment that celebrated creative achievement.

Now in its third decade, the New Jersey Inventors Hall of Fame is supported by the Office of Innovation & Entrepreneurship at Stevens Institute of Technology and the law firm of Greenberg Traurig, LLP. 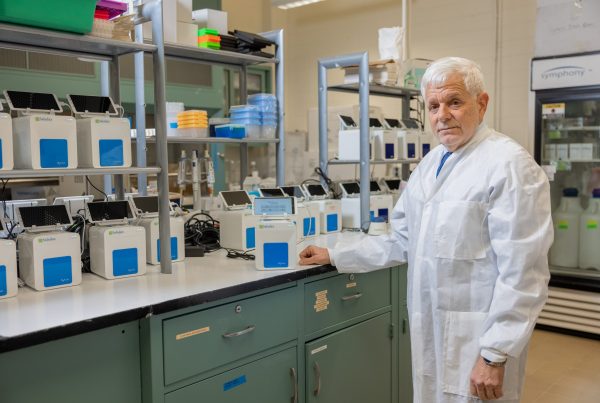